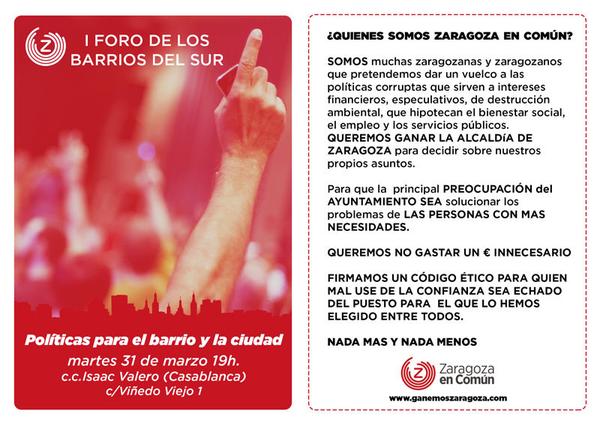 Fernando Rivarés, Arantza Gracia and Rosa Burgos will bring to the neighbours of Valdespartera, Montecanal, Casablanca, Rosales del Canal and Arcosur the main proposals of their candidature and will be listening to the demands proposed by the neighbours of these areas.

Several members of the electoral roll to the City Council  knowing the situation of these neighbourhoods first hand like Tatiana Cardenal, Iván Andrés, Miguel Isla or Daniel Gil will attend to this public venue. In addition to this, a brainstorming session will be held in order to debate topics concerning and mattering to the citizenry as educational facilities planification and public services quality.

The aim of this public venues is to introduce Zaragoza en Común, a city-orientated project. So as to achieve it participative methodologies, collaborative programmes and documents containing the Code of ethics will be discussed with the participants. Zaragoza en Común would like to invite all the neighbours of the South-Side Districts of the city to come and know the candidature, add their initiatives and express their concerns. Apart from the Neighbourhood Forums, Zaragoza en Común operates with other organizative tools as the Sectorial Forums where the cityzenry makes its contributions to the electoral programme gathering the topics in subjects as social services, urban development, culture.. There is a first draft of this programme which is in now under emendation process.

One of the commitments expresed in the Ganemos Zaragoza Appeal is to take our affairs management back through an honest, clear and responsible performance, working first in the closest areas of concern: our city, our neighbourhoods, our City Council. There is only one path to make this initaiative successful, there is only one requirement to WIN ZARAGOZA: People in the streets must take the decissions.