We pedal for the women visibility 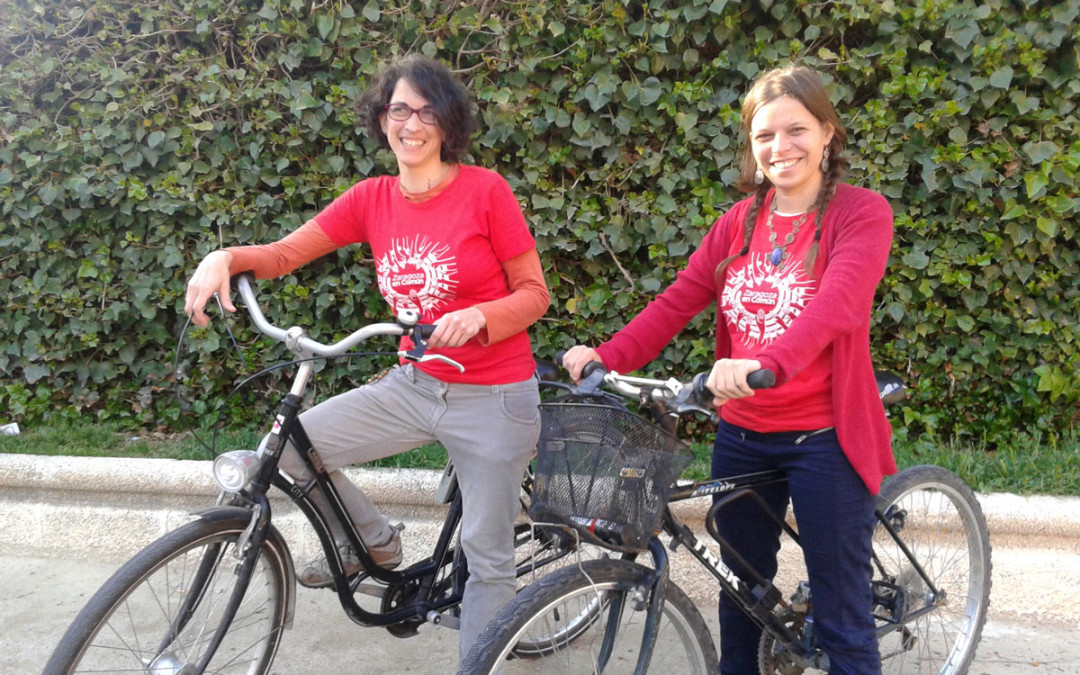 Boost the joint responsibility, guarantee and put rights at the same level , make it visible and raise awareness on Feminism and promote the Fair Treatment in all the Public Services are the 4 key points of the program where the municipal candidature is working.

Zaragoza, on March 27th 2015.- A group of candidates of Zaragoza en Común has taken part in a cycling march going through streets, sculptures, and buildings remembering the figure of remarkable women in history. Previously, Elena Giner and Arancha García have taken advantage to introduce some of the main objectives the electoral program has in regards gender equality. This is one of the core lines of the program that also has specific measures.

The electoral program is still in process but four axis have been built in order to be completed with other specific proposals.

«So as to guarantee and balance rights, we need to affect in the primary conditions to get those rights» explained Elena Giner. » We want an Equality Plan not only gathering programs, but re-thinking the logic of the intervention , even auditing the budget from a gender approach». Wewant the same parity we have applied to our candidature to be used in all the designations of public charges and relevant functions», added the aspirant to City Councillor of Zaragoza en Común, talking about the design of the lists through zipper shaped structures where women and men are intercut.

To guarantee the women’s right to security is one of the priorities that Elena Giner highlighted: » We must take back to public the Consultancy for Women Victims of Gender Violence at the Casa de la Mujer, must increase the resources for the Refuge and give specific training and awareness to the Local Police, as well as audit the procedure of treatment for violence victims. Those are the specific measures we want to develop and implement»

The joint responsibility is other of the main objectives to launch «in order to eradicate and subvert the gender inequalities trough measures making men, women, the City Council and enterprises responsible for its success», Arancha García pointed. Specific initiatives like reviewing and changing the Municipal Primary Schools opening times or supporting the companies to work towards the schedule flexibility so the people may have the opportunity, the right and the obligation of performing caring activities.

Arancha García also highlighted another objective contained in the electoral program of Zaragoza en Común: the Guarantee of Fair Treatment from the Administration. » It is based in putting the Care Measures in the center of attention of both men and women – Arancha García Explained -, the City Council Services have to be good quality, but this quality has to be human warmth». » We talk not only about Public Services efficiency, but of fair treatment to the users so their level of satisfaction can be measured» she concluded.

Elena Giner also mentioned that one of the openings for work which Zaragoza en Común is working in is to advance in Equality and Integration, » sponsoring a sports plan including mixed leagues working in values further than  the competition, as the co-operation, the inclusion or the diversity, not dividing into boys and girls from an early stage».

The candidates Elena Giner and Arancha García have taken part in the Cycling Route «Among Women» arranged on the occasion of the Women Visibility Workshop organized by the collective Las Bielas Salvajes in collaboration with the Casa de Juventud del Arrabal. The route that gathered more than 50 people, has gone through remarkable spots for the figure of the woman.