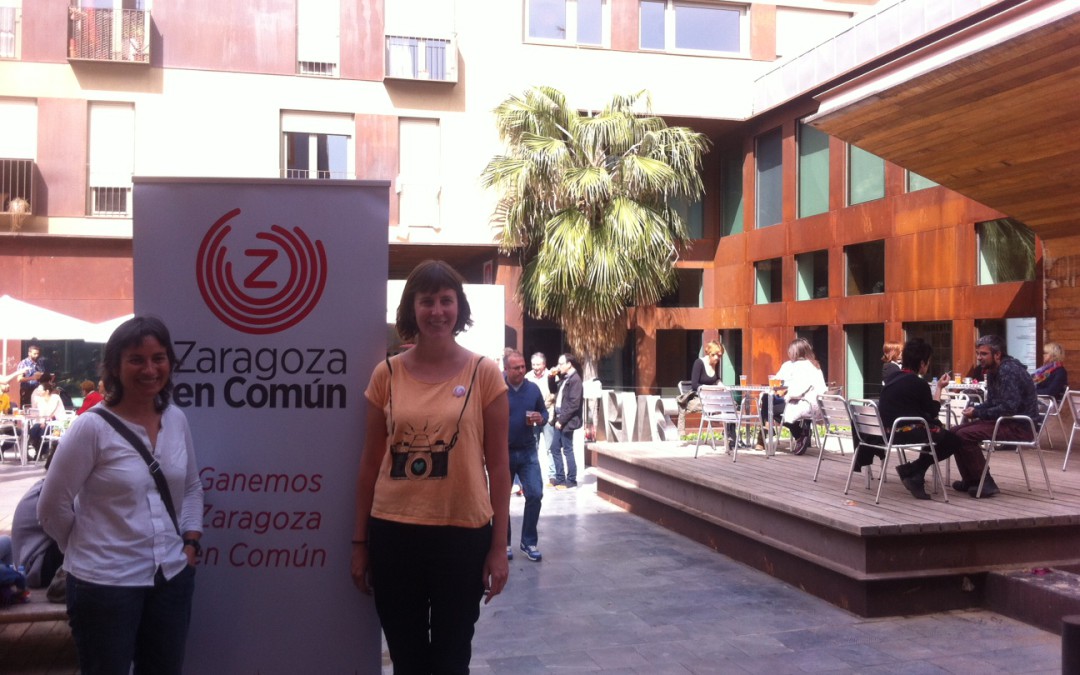 Luisa Broto and Teresa Artigas have visited this morning Las Armas market to introduce new initiatives for the upholding and the sponsoring of the small commerce in the neighborhoods.

Zaragoza April 12th 2015.- The candidates of Zaragoza en Común Luisa Broto and Teresa Artigas have appeared before the press this morning to introduce the proposals of the municipal candidature for the reinforcement of the small cmmerce in the neighborhoods. They have chosen Las Armas market as scenario for being an example of comercial dynamization process in a traditional district, accompanied from the City Council through institutions as PICH or Zaragoza Vivienda.

Luisa Broto explained that «one of our main concerns is to generate employment and to keep the existing in dignity and quality conditions», pointing out that the retailer sector, and especially the local commerce do this function in Zaragoza.

«We want to simplify the administrative procedures when applying for commercial activities licenses or to facilitate commercial dynamization initiatives as the open-air markets, such as this started in San Pablo District» added Broto.

In the other hand, Zaragoza en Común demands a participative process in the area of the self employed and PYMES in order to improve the municipal help to their economical activity.

Recovering the moratorium for the Malls

In the same way, the candidates of Zaragoza en Común defended avoiding the unfair competition made by the large stores to the small commerce. » When a new opening of a large store is announced in Zaragoza it is always mentioned that is going to generate new employments but according to reports from Economistas sin Fronteras, for each position generated there 1.5 positions are destroyed in the small commerce» pointed Teresa Artigas.

It is relevant to urge to the Gobierno de Aragon to reinstate the moratorium of the Malls as a City Council, due to the fact that «we are the city in Spain with the highest ratio of commercial surface m2 / inhabitant». «It is a business model that in the end becomes a one hit wonder, being succesful for a season and fading away when a new Mall opens shadow boxing it», regreted, mentioning famous cases as Plaza Imperial or Centro Comercial Augusta.

Zaragoza en Común is in favour of the standardization of the opening times, indicating that the current situation where the Touristic Interest Zone is limited to the Old Town area, should not be extended. It is considered that the small commerce already has flexible opening times and the discussion generated with the declaration of Touristic Interest Areas of places such as Puerto Venecia will serve only to unstabilitate the labour conditions of the people working there. Precisely, Teresa Artigas pointed out the environmental advantages of the proximity commerce in the neighborhoods, because it avoids car journeys and traffic jams such as those happening so oftenly around Puerto Venecia.