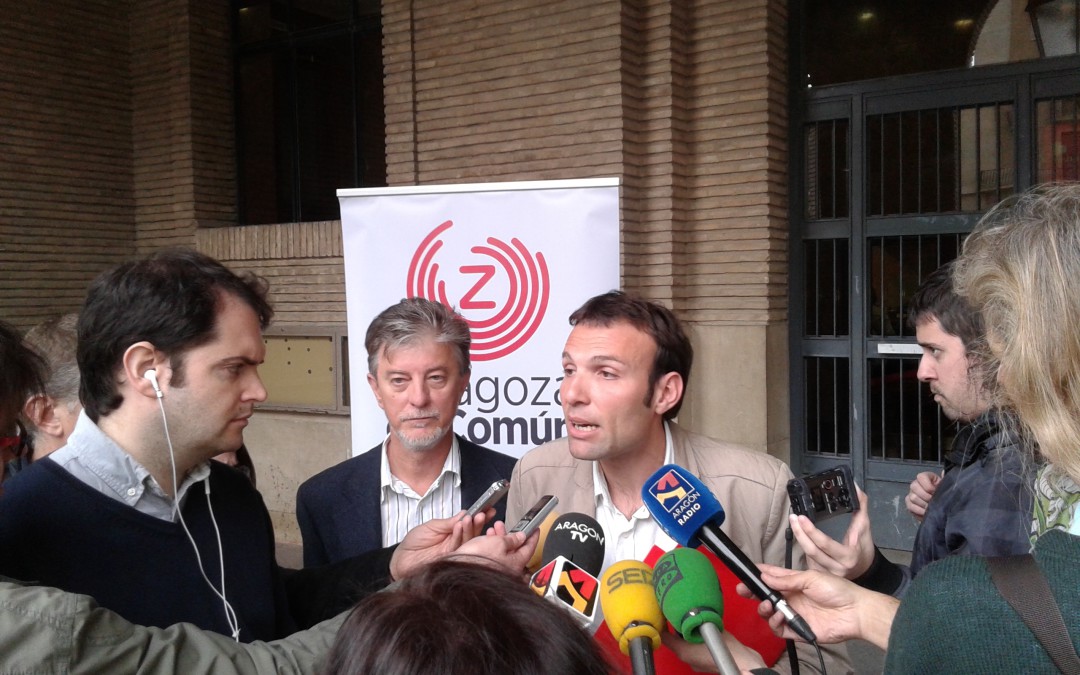 Pedro Santisteve and Pablo Muñoz criticized the express tramitation that means a «gift to the owners of the Club and the bidders».

Zaragoza, April 22nd 2015.- Only with 9 days to the last plennary of the mandate, Gerencia de Urbanismo has passed with the only negative vote of Pablo Muñoz the administrative and economical clauses list for the cession of La Romareda Stadium to Real Zaragoza SAD.

The candidate to the City Council of Zaragoza en Común Pedro Santisteve expressed «we see stunned the tramitation of this dossier that is tremendously worrying and full of hope, because there is a lot of fear in the City Council,  because they see transparency and accounting rigour coming» he alerted.

Santisteve branded as pillaging this cession for 75 years because according to him «is making a gift to a private bidder not involved in looking for the benefit of the city».

In declarations to the press Santisteve affirmed that «the stadium is stolen to the city and the supporters» and that it strikes against the processing of the dossier «with an unusual celerity being done in only 9 days».

Santisteve also pointed that «now 50 millions are considered to be invested in the refurbishment of La Romareda, what involves to get the City Council more into debt, and we do not know what we will find when we open the drawers there»

The impression of the candidate is that «the citizen interest is confronted with the celerity of the process of the dossier and the personal benefit of a group of families that will take positions and whose intentions are very clear» and mentioned that «when the city does not win, only loses».

Finally he put forward that from Zaragoza en Común a refurbishment of the Stadium is requested, but «first the budget priorities have to be discussed and the DGA has to agree the future project to be developed in the next mandate».

Pablo Muñoz criticized the beginning of the cession process of the Stadium to Real Zaragoza because «it is an assault that thieves a footbal arena to the citizenry and the supporters».

The candidates have claimed that «the stadium is being cessed without defining which remodelation works are going ot be carried on and who is going to pay for them». They also have exposed the legal doubts arosen by the processing of this dossier considered «clearly illegal because it is not cessed to the Club Foundation, but to the Sport Society, an enterprise ruled by four families that will own the stadium for 75 years, and something like this should be justified».

In a press conference Muñoz criticized as well «it is not even known the public interest of cessing to a company the stadium». Also that «it is illegal because there are not reviewing clauses included in this contract as normally the City Council does, being able to revoque this concession in case a superior general interest is found».

From Zaragoza en Común we claim for a «renovation good enough to play, not to do a five stars stadium, with the participation of Gobierno de Aragón and the football club and with the transparency required». Muñoz regreted that «half of the dossier is missing because Real Zaragoza requested to include the scheduled works,  and when more detailed questions were done, Pérez Anadón answered that the renovation will be paid by the City Council».